Powered by his love and mastery of the simple wooden flute, Chris Norman has gained an international profile over the past three decades via his critically praised work as a performer, composer, teacher, flute-maker and builder of a musical community.

Born in Halifax, Nova Scotia, Chris developed an early passion for traditional Maritime, Celtic and French Canadian music. As a performer and composer, he is a champion and standard-bearer for these forms while simultaneously exploring their boundaries and fusing them with classical styles. The recipient of numerous grants and commissions, Chris has shared his creativity and ingenuity around the world in the form of compositions featured on National Public Radio, the CBC, the BBC, and concert halls from Canada to New Zealand. His composing and playing have also appeared in more than 40 commercially released CDs which range from solo efforts to recordings as part of a duo or ensemble. His recorded work has earned numerous awards, including Indie Awards for best Celtic Album and best Seasonal Album, and a CBC Listeners Choice Awards. He has toured as a solo performer in recitals and with orchestras, as a duo with violinist David Greenberg and with his eponymous group The Chris Norman Ensemble. He has also been a prominent player in international touring ensembles such as Helicon, Skyedance, the Baltimore Consort and Scotland’s Concerto Caledonia.

He is a maker not only of music with the flute, but of flutes themselves, creating bespoke instruments for players worldwide. In this pursuit he has received mentorship from prominent flute-makers Rod Cameron, Robert Bigio and Michael Grinter among others. He is well versed in traditional machining techniques as well as CNC and 3D modeling, and is a talented hand-engraver of his silverwork in a flare-cut style, having studied under master engravers Sam Alfano, Diane Scalese, and Rod Cameron.

He is the driving force behind Boxwood Festivals, whose annual weeklong celebrations of traditional music have taken place in Canada, The USA, Australia and New Zealand, and on-line for the past 26 years. As founder and director of the festival, Chris unites and inspires musicians, teachers, academics, flute-makers and engages a multi-generational, multi-disciplinary community – an achievement that is the subject of a documentary film Scattering of the Stars released in 2017. In recognition of his significant, unique and wide-ranging achievements he was presented with the Queen Elizabeth II Diamond Jubilee Medal for contributions to the arts in Canada in 2012, and awarded the degree of Doctor of Laws, honoris causa by Dalhousie University in 2015. 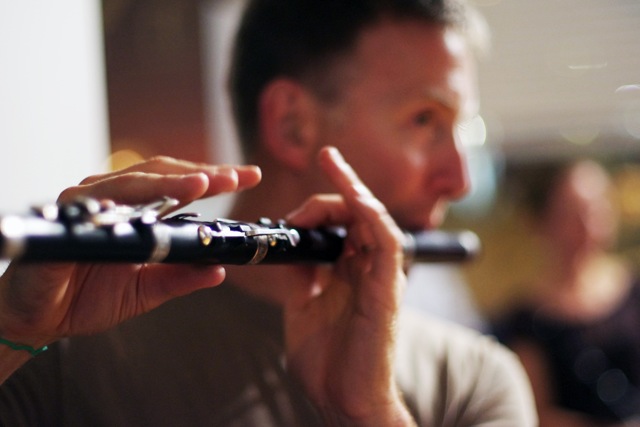 . . . a flute player of spectacular and imaginative virtuosity”

“A flute superstar . . . the musicianship just came wailing out”

“A musician like Chris Norman comes along, oh, perhaps once in a century. He’s the kind of player whose virtuosity serves the music without becoming the performance itself; whose exceptional technique not only is of the “he’s so good he makes it sound easy” variety, but also frees the music to reel out as if it, the instrument, and the player were one communicative entity.”

“. . . Norman stands out for his spirited eclecticism . . . His rootsy heritage shines through in every nuanced embellishment, trill, triple tonguing, and silky slide. It’s clear that Norman is having a ball, with the chops to make it sound effortless.”

“The Chris Norman Ensemble wondrously demonstrated that classical and folk need not necessarily be separate entities at all. They can intertwine to enchanting effect . . . Norman’s agility with his wooden flutes was exceptional, as was his way of conveying the expressive heart of each piece. He has formed a marvelous ensemble of like-minded musicians.”

“Norman is certainly a special musician. In solos or accompaniments, (he) brilliantly spun out delicate phrase after phrase, bridging the centuries-wide gap to make the music ours . . . it was charmin’ Norman’s night, whether hovering expertly between several flutes or pumping the bellows of the Scottish small pipes. He is a star in this Celtic crossover firmament, titillating with triple-tonguing and then turning around to caress a folk melody as if it were the best of Mozart.”

“I was recently heard to remark that it would be wonderful to feel as at home with anything as Chris Norman seems to be with his flutes, and this CD is further evidence if any were needed of the exceptional talent and musicality he possesses. His playing of this repertoire is never less than utterly convincing . . . musical characters such as Chris Norman are rare in any generation.”

“Norman is a commanding, expressive player. He sails through dances with endless energy, giving the sort of continuous circular motion to his phrases that makes it tough to just sit still and listen. These pieces demand actual dancing. Norman plays with the expressive freedom of a singer and the improvisational freedom of a jazz player.”

” . . . pleased to hear the distinctive, virtuoso flute playing of Chris Norman, unquestionably the world’s foremost performer of this [Scottish Baroque] repertoire (and a consummate musician by any standard)”

“You might describe Chris Norman as the Jean-Pierre Rampal or the James Galway of the wooden flute . . . he is in a class by himself for the agility, the expressiveness, the subtlety of dynamics and phrasing that he generates”